LMAC    -    Member of the Lex Model Airplane Club ( LMAC )
CKRC    -     Member of the Central KY Remote Control Club ( CKRC ).
CKFF   -   Central Kentucky Float Flyers
P    -    Private Pilot
PP    -    Professional / Commercial Pilot
WWII P    -    WWII Military Pilot
﻿   In Memory of our Honor Roll Members    ﻿
We want to cherish our fond memories of these deceased modellers with a famous poem (below).   It was written by John  Magee, an American pilot who flew a Spitfire with the Royal Canadian Air Force in Britain during WWII.
On his seventh flight in the Spitfire,﻿ he was weaving his way up through the clouds to 33,000 feet.  During his climb out, these words came to mind -- "To touch the face of God."
After returning to the airfield, he captured the rest of his thoughts in this poem entitled, "High Flight".   A short time later, he was killed in the crash of his Spitfire at the age of nineteen in 1941.

Portions of this lovely poem (below) appear on the headstones of many aviators interred in Arlington National Cemetery, the  United States military cemetery in Arlington County, Virginia, across the Potomac River from Washington, D.C. 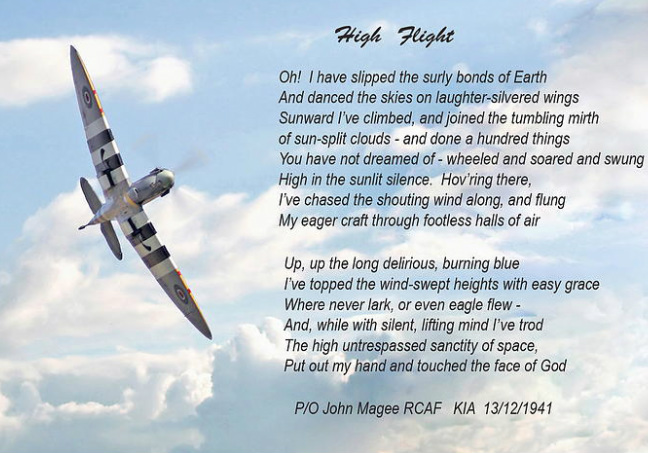